Crosscultural Adaptations of Shakespeare in Indian Cinema on the Example of ‘Kaliyattam’: Beeing Between as a Source of Inner Division 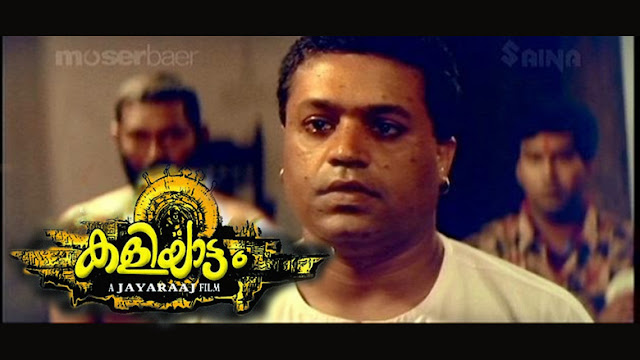 Setting Kaliyattam in the reality of contemporary India certainly makes it more accessible and meaningful to the Indian audience. But the successful change in cultural setting also shows how universal and relevant Shakespeare’s play still is. The main contrast present in Shakespeare’s play was between two different worlds: the ‘white’ Christian Europe and the ‘black’ Muslim world (represented mostly by the title character of Othello). These dichotomic race and faith distinctions have been translated in Jayaraj’s movie into the system of castes (jatis and varnas). It can be said that Othello’s horizontal system of disparities (with the main hero being half between - which makes him ‘a stranger everywhere’) has been transformed in Kaliyattam into a vertical one. Two collaterally existing worlds – one of which is perceived by the other as an inferior one - have been changed into one, but with a clearly-defined social ladder which makes the distance between people who belong to different groups even harder to overcome. Making Kaliyattam’s hero a person belonging to the lowest part of society (formally excluded from the social order as the name “outcast” suggests), but – due to his profession – moving temporarily to the top of this hierarchy gives a new dimension to the hero’s situation and the sense of his ‘otherness’. 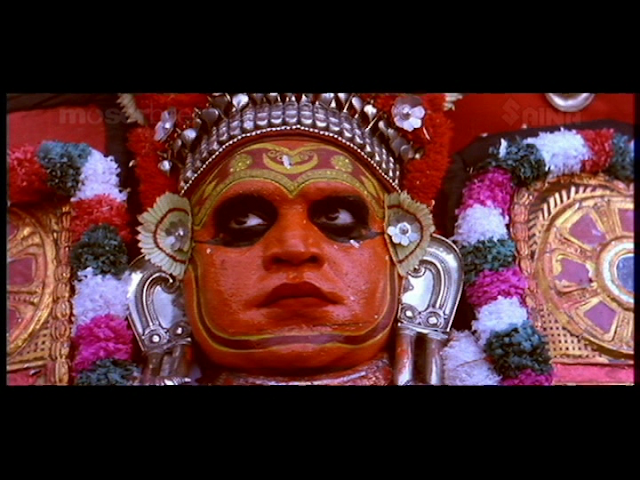 An important feature of Othello is its setting in Venice, a city of questionable moral reputation. The city’s infamy lay behind Iago’s cunning plan leading to convincing Othello that his wife may be unfaithful to him. India in general, and its southern part in particular, is definitely not famous for sexual liberty and courtesans. On the contrary, it has a reputation of being a conservative country grounded mostly on traditional, domestic values and this is also the world presented in Kaliyattam. But what is common for both of these realities – 16th c. Venice as well as 20th c. India – is a strong patriarchy where the position and role of women is low and narrowly defined. Thus – in spite of not having such a promiscuous culture around her as Desdemona and shown in the movie as a very modest woman clad all the time in a simple, white sari – Thamara is as much under scrutiny about her possible lack of chastity. The reason for this is as much both her ‘unruliness’ demonstrated by ‘betraying her father’s trust’ (and, even worse, loudly defending her choice) as well as the traditional patriarchal idea that women are inferior creatures not to be trusted too much. The traditional Indian woman’s role is still to be submissive and obedient to a male (a father or a husband). One of the most popular models of femininity in India — also the model of a perfect wife — is Sita and, as Yajnik notices (193), the character of Desdemona is very much a ‘Sita type’. Thamara’s unconditional devotion to her husband — irrespective of his growing suspicions towards her — fits very well the traditional patterns of behaviour expected from Indian women. These patriarchal standards are also echoed in the saying, which appears in the movie: ‘an theechamundi is safe in his walking on embers as long as his mind is pure and his wife is chaste’. Women’s chastity is presented as a key issue and even the slightest surmise of unfaithfulness could lead (as can be seen both in the case of Sita and Thamara) to serious consequences. Another example from the movie showing how much a traditional Indian woman can sacrifice in order to satisfy her husband’s and the society’s patriarchal expectations is the case of Cherma, Paniyan’s wife. She has no qualms in betraying her female friend’s trust by stealing the bed sheet from her house. She does it as a result of being convinced by Paniyanabout the magical properties of the robe, which supposedly would ensure her husband’s professional advancement and her bearing a child (both proof of her ‘full femininity’ securing a future heir of the family) Cherma seems to be a perfect personification of a women’ situation in a patriarchal world, maybe even worse than the one from 16th century Europe.

Jayaraj transferred Shakespeare’s original vertical background based on race and faith’s disparities into horizontal one - connected with a rigid social system of castes. Making his hero a theyyam artist, thus someone who belongs to the lowest part of Indian society, but thanks to his art temporally gets ‘a god’s status’, gives a brand new dimension to the sources of the protagonist ‘otherness’ and possible ‘dissociation split’ in his mind connected with this. As an dalit, thus in his everyday’s life, Perumalayan is almost invisible for members of higher classes, he is nobody. But during the theyyam performance, after getting full make-up, he rises above the whole social ladder, as he becomes ‘god’s vessel’ and gods are above kshatriyas (kings or warriors) and brahmins (priests). Therefore at those moments he is treated with utmost respect and even asked for advices. Shakespeare’s Othello – while respected as a successful warrior – is just a man, he never experienced such moments of ‘divinity’. 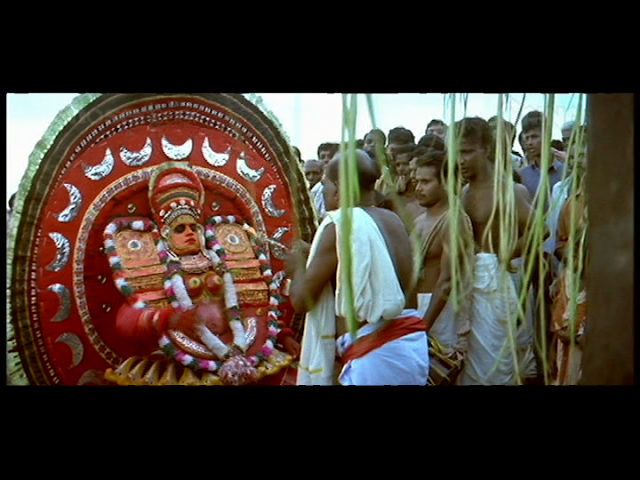 There is a fascinating scene in the movie when Thamara’s father, coming furious to the shrine to confront with Perumalayan after getting to know that his daughter eloped with the latter, when seeing the hero painted (thus already acquiring godly status) instead of trying to crush him instantly treats the hero with full respect and even asks him for advice regarding his own present situation. He comes back to his accusations only later, after the show. This is a power of divine embodiment gained temporarily by an outcast theyyam artist and Jayaraj gives emphasis to this godly (spiritual) aspect even through the English title of his movie ‘The Play of God’.

This is as well an additional source of the inner division for the protagonist. Othello’s ‘blackness’ was constant, even as a respected general he was still ‘the black Moor’ in a world of white Europeans and he did not have to constantly juggle between two such extremities as Perumalayan has to do all the time. What is common for both of them is that before falling in love with a woman form a higher class they do not seem to think about their specific situation so much. Thus, in both cases, it is their romantic relationship and then a plot conceived by the jealous professional rival which becomes a trigger starting a process of losing their self-esteem. But while this progress of ‘becoming (in his own eyes) more and more black’ is presented by Shakespeare - in accordance with traditions of Elizabethan theatre – mostly by words (in dialogues or soliloquies) Jayaraj shows it rather by using visual imagery, which is specific for the language of cinema. Thus in order to depict Perumalayan’s growing insecurity, restlessness and his tormented mind the director uses a number of images. One of these scene shows a nightmare during which he sees Thamara and Kanthan together in bed – what is more, repeating a special ritual with colourful powders applied by the couple on each other’s face before making love, thus sharing an intimacy reserved only to them. 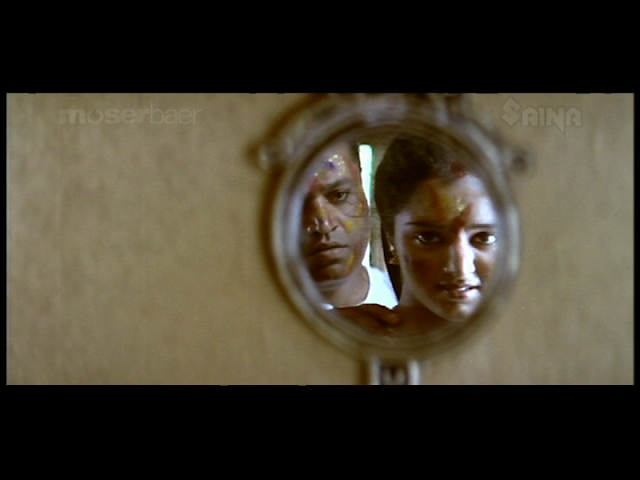 Another one presents faces of Perumalayan and Thamara’s seen in the mirror when he clearly notices a difference between their faces and it is not just about the skin’s shade (her being more white and his dark) but also his ugliness in comparison with her beauty. This is a serious thing as, opposite to Othello’s who - apart from his skin’s colour - is usually presented (also in numerous adaptations of the play) as a quite attractive man, Perumalayan is not so, even for the local south Indian standards (a bit different from European). He is visibly overweight and his face is full of pockmarks after a smallpox which the hero successfully survived as a small child (and which killed the rest of his family). Thus he really has nothing else on his side except of his talent as a theyyam artist and - in contrast to Othello whose skills as a warrior could be attributed fully to him – this talent is more a vocation, therefore gods’ gift, not really his personal achievement. Therefore why does Thamara love him? And if for his daring performances as a theechamundi does she really love him as himself? Also – as her chastity is considered a necessary requisite for his professional prosperity (being safe while walking the embers) – his preoccupation about her faithfulness has an additional aspect not present in Othello where Desdemona’s possible infidelity was in no way connected with her husband’s work sphere. It finally turns out that it is his mind, which stopped to be pure, not her possible infidelity that has become the reason enabling his future career and this only adds to the tragedy. 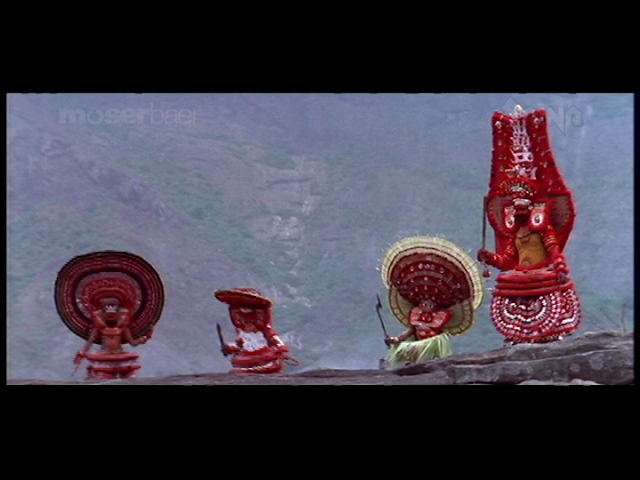 There is also a very symbolic scene when the hero, tormented by his suspicions, prays to theyyam gods asking them for advice and a bunch of colourful gods come to him but then they turn back and leave him without any answer. Thus someone who – as a ‘god’s vessel’ – gives advices to others cannot himself count on similar help from gods’ side — as if such help (in getting the peace of mind) was not destined to him. Definitely, through all the movie, the hero – similarly to Othello - is completely alone with his problems and suspicions (except for ‘help’ from Paniyan’s/Iago’s side). And Perumalayan’s mind is even more simple than Othello’s (using Bradley’s terminology). He is not an educated or reflective person and even his art is a gift, thus all this complicated world of feelings and relations makes him completely lost and helpless.
One more fascinating aspect showing that the hero is continuously “in-between” two states is the crucial scene of killing the heroine. Perumayalan does it just after his performance and he still has part of his theyyam makeup on him (his face is painted). Thus he strangles Thamara while being – according to the ritual - half man and half god. This scene shows also how deeply – much in accordance with the tradition of the Sanskrit theatre – the sphere of sacrum (divine element) is present in this adaptation. What the hero does after realising that he was misled is also a bit different from Shakespeare’s version, and more in the vein with the rules of the classical Indian theatre. While Othello instantly commits suicide Perumayalan takes his time and first settles all things around him: thus he awards rightful punishment to Paniyan and formally anoints Kanthan for his successor. Only then he finishes his life by entering the ritual fire and ending his state of division split caused by ‘being between’.